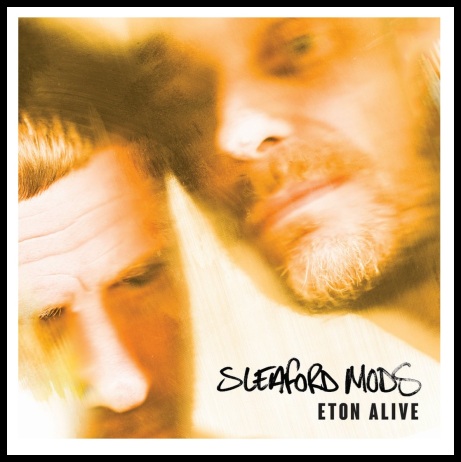 The Sleaford Mods are back.

And they’re pissed off!

This week see’s the release of their fifth studio album, entitled Eton Alive.

The Nottingham duo are currently described as one of the most important, politically charged and thought-provoking bands making their way up the ladder in the UK music scene. They are not like your clean-cut Brit award ambassadors. No, these lads are actually have a message to tell and ooze charisma whilst doing it.

The palpable anger is still very much prominent from the duo’s first album on their own label, but it’s now moderated by a greater sense of resignation.

We see this on songs such as the lyrically accessible “Firewall” and “When You Come Up to Me”, where vocalist, Jason Williamson, drops his regular sprechgesang technique in favour of actual singing. Who would’ve thought it?

There will be a few die-hard Sleaford Mod fans who see this evolution as a betrayal, who yearn for the no-frills battery of yesteryear. But if Sleaford Mods had been content to remain the ugliest one-trick ponies in the biz, constantly at odds with their peers, then that trick would have become pretty boring.

Lets dedicate a minute to Andrew Fearn. You know, the chap in the Chief Wiggum t-shirt who hits play on Jason Williamson’s backing track before kicking back a few cans of Stella. On Eton Alive, Fearn’s arrangements are more sophisticated than ever before. The bassy groove of ‘Big Burt’ sounding like an actual song. And ‘Top It Up’, with an ominous synth line, veers into art-pop territory. This indicates the polish that success has afforded Sleaford Mods (on ‘OBCT’ Williamson admits he lives “in a house three times the size of my old one” and drives past “Oliver Bonas in the Chelsea tractor”). But they’ve not changed. They’re still taking the piss.

Particularly potent is the ominous post-punk bassline he deploys on OBCT; even what sounds suspiciously like a kazoo solo towards the end can’t puncture its sense of menace.

Be assured that Sleaford Mods will have plenty to say on the subject of Brexit, austerity, and pretty much everything else related to the “shit pipe of this tatty civilisation” – all splurted out in their usual inimitable rattle-and-rant style.